The sellers’ market in Lane County housing grew even stronger in March, as average home sale prices continued to climb, according to the latest report from the Regional Multiple Listing Service in Portland.

The number of home sales and new listings — homes just hitting the market — in Lane County rose from February to March, the report said.

Those numbers are down, however, from March 2016 because the inventory, or supply of homes for sale, is lower than a year ago, while demand for homes has stayed strong. 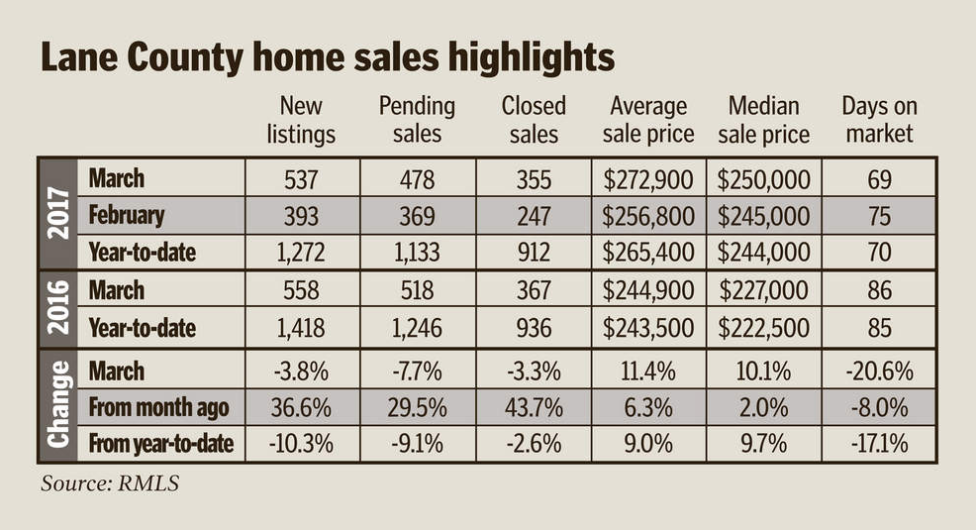 “At the end of March, we were dealing with about 70 percent of the inventory levels we had at the same time in 2016, yet the pending (sale) activity is the same as last year,” said Elliott Wood, president of the Eugene Association of Realtors.

“It’s making (the market) swing more so in the direction of a sellers’ market and is tightening the market even more.”

In the Florence area, the average March sale price for homes was $203,000, according to RMLS.

The spring market that buyers and sellers typically wait for has arrived — and earlier than it did in the years immediately following the Great Recession, Wood said.

“March looks to be the beginning of a really active and great marketplace in Eugene and Lane County,” he said. “It’s kind of the month that will springboard 2017 into another really strong real estate market for us.”

Wood said Lane County has the “best of both worlds,” because sellers are able to get high value for their properties, while prices are still affordable for buyers, compared with other housing markets.

“Seattle and Portland are growing by leaps and bounds,” Wood said, “and we get that trickle down because … quality of life and buying power are still good here.”

Meanwhile, the inventory of homes for sale and the time it takes to sell them are edging down.

The inventory of homes in Lane County dropped from 2.2 months in February to 1.7 months in March. The number is based on the time it would take to sell all for-sale homes in the county at the current sales pace.

The total time that homes were on the Lane County market before they sold was 69 days in March, down from 75 in February, RMLS reported.