Granny flats, in-law apartments, carriage houses – whatever your preferred nickname for accessory dwelling units, they've been popping up alongside single-family homes all across Portland.

One important reason? Homeowners have saved tens of thousands of dollars in Portland development fees after city officials waived them five years ago in an attempt to spur affordability and density. The number of permit applications spiked immediately, from 25 the year before the waiver to 92 in 2010, according to data provided by the Bureau of Development Services.

As the economy improved, vacancies plunged and services like Airbnb offered another incentive, the total increased every year. More than 260 permit applications were filed last year, and as of early September, this year's tally had already reached 314.

The city is likely to reinstate the fees – which help pay for infrastructure like roads, water and sewer systems – next year. But any slowdown caused by the increased cost won't grind construction to a halt, homeowners and building industry officials say. The so-called "granny flat" has emerged as both an investment and a modern type of living arrangement.

"One might think that this market has matured sufficiently to be able to operate without the waivers," said Andy Peterson, a project manager with the Bureau of Development Services, in an email. 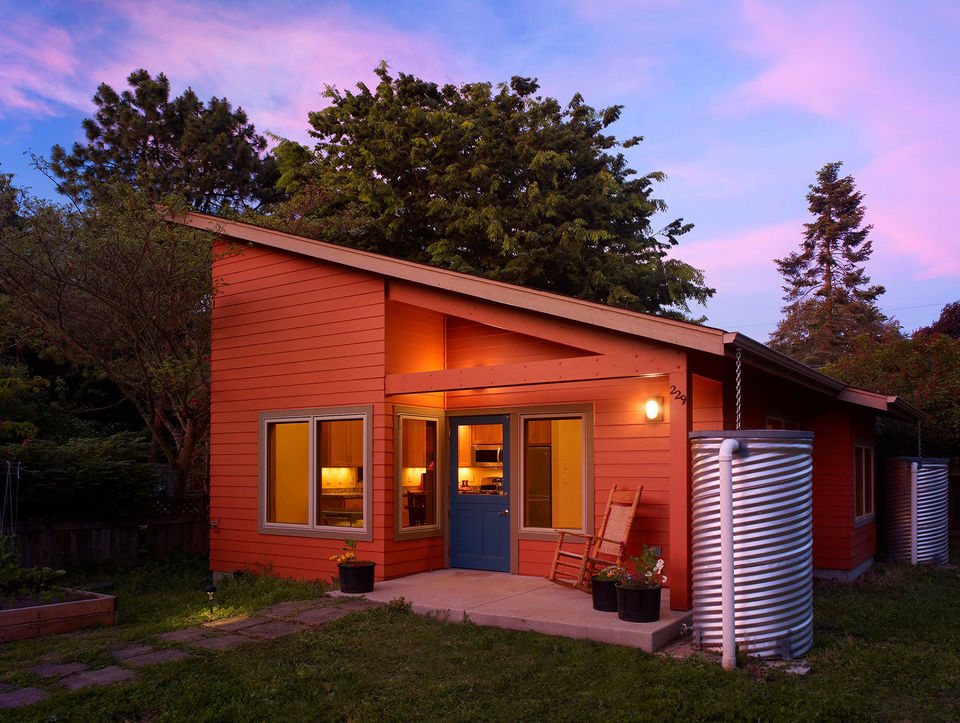 The uses for an accessory unit are many. Some homeowners rent them to those unable to find a traditional apartment. Others play Airbnb host, charging hundreds of dollars in some neighborhoods for a night's stay. Families build them for aging parents so they can be nearby and still maintain some independence. People squeezed by stagnating wages and uneasy about retirement are even building the units, moving into them and then renting out their larger homes. And some pursue a mix of those options.

Jonathan Collins built a studio apartment-like accessory unit last year on his property in the Beaumont-Wilshire neighborhood. His parents live there now.

"They love it," said Collins, a co-founder of the communications companies Epipheoand Sincerely Truman. "We really enjoy having them so close yet technically next door in their self-contained unit."

But while his parents were gone for six weeks over the summer, Collins decided to try Airbnb. The online short-term rental service worked well and "brought in some cash," Collins said.

The city's fee waiver gave Collins "more reason to pull the trigger" on the unit, he said. But he added that he "would have built it even if it was more costly and time-consuming."

Designers and builders have seen a boom in business since 2010.

Eric Fowler, the owner of Northwest Heritage Renovations said the local interest "is incredibly high right now." Ryan Austin of Polyphon Architecture and Design said the product accounts accounts for about a quarter of his firm's workload but the majority of its finished products. And Nick Mira, co-founder of the startup architecture firm Propel Studio, said his company's "revenues have doubled" in the past three years because of accessory units.

"That has been a big part of our emerging small business," Mira said. "And we have grown because of the spike." Mira's business partner, Lucas Gray, said the reasons people want them are all over the board.

The partners expect "a rush" of units over the coming months, as the fee waiver is set to expire at the end of next July. There's no reason to expect the Portland City Council will extend it again, as it did in 2012. Commissioner Dan Saltzman, the head of the Bureau of Development Services, said in an interview last month that there was "no need to renew those waivers." And Peterson, the city project manager, said the waivers "are not intended to run on forever, so the sunset date is likely to be the sunset date." 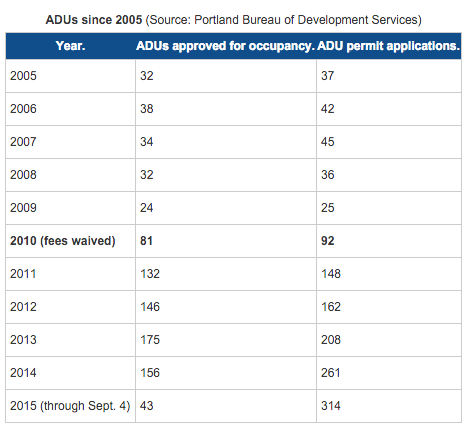 But Mira, Fowler and Austin agreed that while accessory unit construction might slow down once the fees come back and price certain customers out of the market, the phenomenon isn't likely to disappear anytime soon.

"Even with the full permit fees, these projects still pencil out pretty well as an investment," Mira said.

That's how Hillsdale resident Barb Sanders, 60, looks at it. Like many, she and her husband, Gary, were set back during the recession and are looking to make some extra money as they approach retirement.

They heard about the accessory units, saved enough cash to build one and decided to try to generate some revenue through Airbnb. And if things get worse, they'll move in the unit and sell or rent their house, she said. They're in the permitting process now.

Sanders, an events director at the American Cancer Society, said she and Gary would likely still build the unit even if there were city fees. But they would have to wait longer and perhaps take out a loan.

"I don't know that we could have afforded to do it [with the fees]," Sanders said. "It really is in our budget that the fees are gone."