Hoyt Street Properties, the Portland developer responsible for much of the Pearl District, wants to build another high-rise tower, this one a 20-floor residential building next to The Fields Neighborhood Park, city documents show.

The proposed building – on a block in the North Pearl bounded by 11th Avenue, 12th Avenue, Pettygrove Street and Quimby Street – would have 150 residential units and 190 parking spaces. 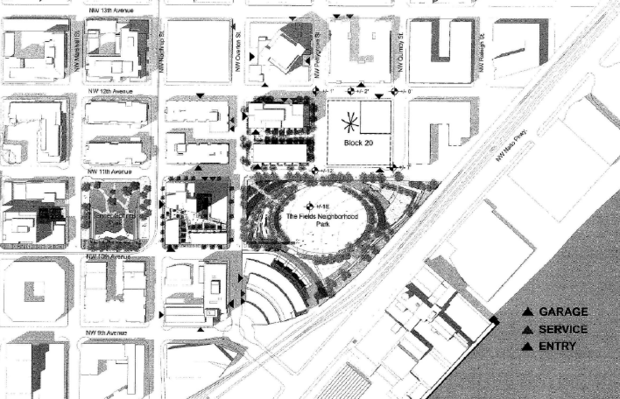 Portland-based Boora Architects is designing the building, records show. Emily Russell, of Boora's marketing department, confirmed that Hoyt Street Properties is the developer and said the company is "investigating another condominium project."

The company spent much of the last year negotiating with the city over a quarter-block parcel at Northwest Raleigh Street and 14th Avenue that officials bought for $1.3 million and set aside for affordable housing.

Portland paid a discounted price for that land because the developer failed to live up to a 1997 agreement stipulating that 35 percent of residential units in the Pearl would be affordable to working-class residents. As of August 2014, only 30 percent of the nearly 2,000 units built were affordable, city documents showed.

A pre-application conference with the city's Bureau of Development Services is set for December 15 at 8:30 a.m.