Research Editor at Oregon Business magazine, Kim Moore, gives us an outlook at Portland’s residential housing boom according to the numbers and what’s to come over the next few years.

The rapid growth in residential real estate development is in keeping with the city’s goal of increasing urban density, a step necessary to housing the estimated ballooning growth of people moving to the city.

But the large, new houses that are being constructed often appear to contradict the city’s commitment to compact development. Many of the newly constructed single-family homes tower above the older, existing housing stock.

Portland planners have to plan for a big jump in population. Over the next 20 years, the city is projected to add 260,000 new residents to the roughly 620,000 people who live here today.

Because Portland is already urbanized with limited opportunities for single family residential development, most new housing units are expected to be multi-family units. By 2035, the supply of multifamily housing is expected to grow by 95,000 units.

But Portland is also projecting growth in single-family homes. By 2035, there will be an extra 26,000 single-family housing units, according to the council’s 2035 Comprehensive Plan, a roadmap designed to help planners prepare for and manage expected population growth.

I took a look at residential permitting data from the City of Portland’s Bureau of Development Services to get an idea of the number and size of new single-family homes, as well as duplexes, townhouses and accessory dwelling units that have entered the permitting process since 2013 to the present day. The information consists of permits that have either been issued, are under inspection or are final.

The numbers show that the number of residential housing permits entering the system is starting to slow for single-family homes, duplexes and townhouses, a sign that available land for development is starting to get tight.

Single-family homes also are getting smaller, though they are hardly small. The average square footage has been well over 2,000 sq. ft. for the past several years.

The size of duplexes and townhouses on the other hand is definitely increasing, and the number of accessory dwelling units has ballooned since 2013.

Here is a summary of the permit data for the different housing types:

Permits for new single family houses peaked in 2014 with 709 permits accepted into city council’s residential housing permitting center. The number has since dwindled to a total of 236 this year, indicating the construction of single family homes is cooling. This is the likely result of dwindling availability of land for development.

Single family dwellings also appear to be getting incrementally smaller. The average square footage of new single family housing permits peaked at 2,580 sq. ft. in 2015. The average this year is 2,389 sq. ft. 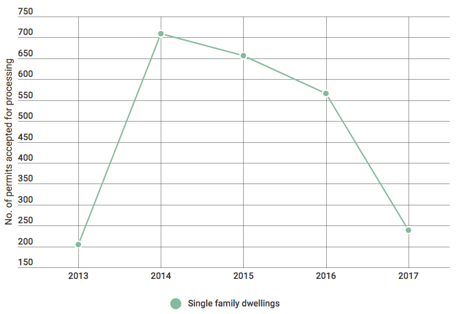 Duplex construction is less popular than single family housing, but a recent increase in permit applications shows it is becoming more widespread. Duplex construction is also more in line with the city’s goal of increasing urban density since these dwellings can house two families instead of one.

The number of permits for new duplexes peaked in 2016 with 47 accepted by the city council for processing, a nearly fivefold increase from 2013. Permits entering the system declined to 33 this year, suggesting construction of these two-family homes may also be slowing.

Single-family homes also are getting smaller, though they are hardly small.

If newly constructed houses seem much larger than older homes, many may be duplexes. The average size of permits for new duplex construction reached 4,343 sq. ft in 2017, a 58% increase on the average housing permit size in 2012. 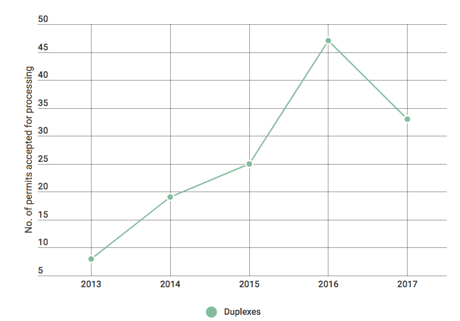 Permits for new townhouse construction also reached a peak in 2016 when 214 applications were accepted for processing. This number fell off a cliff in 2017, however, with only 19 permits entering the system. 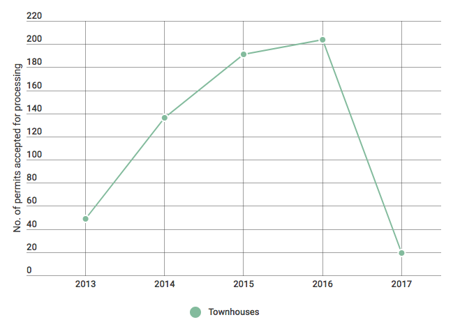 The popularity of ADUs has exploded in recent years. ADUs are a second dwelling unit created on a lot with a house and are smaller than the main dwelling. Portland reportedly has the largest number of ADUs in the U.S.

Since 2013, 867 permits have been accepted into the city’s permitting center for the construction of ADUs. Last year, the city accepted 329 permits into its system, an 18-fold increase from 2013.

The average square footage of a permit application for an ADU in 2017 is 627 sq.ft. Their popularity comes on the back of declining land for new residential construction. ADUs, or “granny flats” are a relatively cheap option for increasing density. 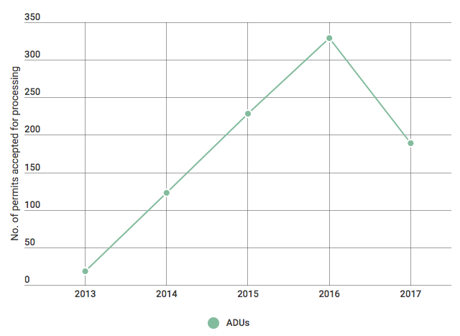