Located in North Portland is the beautiful and popular neighborhood of St. John's. Nestled at the confluence of the Willamette and Columbia Rivers, this Peninsula of sorts sits just across the Washington Oregon border. 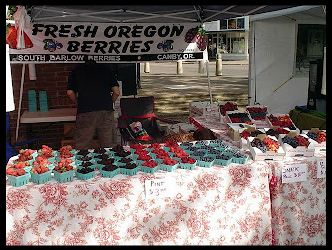 Most of the neighborhoods in this community sit at the southern quarter of the area itself while the northern half is covered by the Smith and Bybee Lakes Wildlife Area and commercial and industrial areas. The neighborhoods in St. Johns spill into University Park on down to Arbor Lodge and eventually into downtown Portland via Interstate 5.

Jantzen Beach and Jantzen Beach mall, although not in the St. John's boundaries, is one of the first landmarks that folks reach coming from Washington State and just across the bridge from Jantzen Beach is the exit to Marine Drive, the Delta Park, and North Portland and onto St. John's. The Heron Lake Golf Course is also just East of St. John's neighborhood as is the Portland International Raceway.

Known as more of a blue-collar neighborhood, St. John's diverse cultural atmosphere blends into an eclectic and artistic community. Popular events such as the St. John's Farmers Market taking place at St. John's Plaza each Saturday from 9 to 2 PM throughout the summer draw crowds not only from the St. John's neighborhood but from around Portland as well. St. John's large organic community focus keeps locals and visitors consistently in a natural state of mind.

St. John's is also well known for its natural habitat including the Smith and Bybee wetlands natural area developed in 1961 featuring over 2000 acres and surrounded by warehouses, commercial areas, and port terminals. The interior remains natural and the wildlife includes beavers, bald eagles, and Western painted turtles. The wetlands area includes interpretive displays, parking and a bus drop-off, several public art displays, and a covered shelter, perfect for picnics and gatherings. There's a lovely bicycle path along the N. Marine Dr. which is part of Portland Metropolitan area's system of Greenway trails also known as the 40 mile loop.

In addition to the wetlands and natural habitat area there are several parks around St. John's including Pier Park, Willamette Cove, Baltimore woods, and Cathedral Park just to name a few. Kelly Point Park is at the tip of the peninsula at the northern end of St. John's. Developed in 1984 by the Port of Portland, Kelly Point Park includes paved and unpaved trails, picnic tables, public art and restrooms, the Vista Point and historical site information.

Homes in St. Johns run anywhere from around $90,000-$400,000 depending on size, condition, and location. The median home price is roughly between $150,000 and $200,000 so this makes an excellent location for those that wanted affordable place to live in a beautiful and convenient community.

If you're interested in finding the perfect home, property, or real estate in St. Johns neighborhood of Portland Oregon please contact me anytime. I want to be your expert in where to live in Portland and all Portland homes and real estate information. Photo Courtesy of the St. John's Farmers Market